Alva Labs sat down with DevSkills founder, Anton Fenske, to talk about the brains behind DevSkills, how Anton came to join Alva, and why hiring engineering talent is so challenging.

1. What was your motivation for starting DevSkills? Tell me about your journey so far.

I first started as a technical interviewer at Klarna. I helped design the tech interview process and helped with interviewing people. Later, I ran soft skills interviews as a Hiring Manager after I transitioned into the Engineering Manager role at Klarna.

Klarna was expanding like crazy in 2020, hiring for many engineering roles. We were iterating the coding tests over and over. I realised how much effort and energy it takes to come up with something reasonable! Not every company out there has that much resources, or even desire, to invest in proper coding tests. Or maybe the hiring team wants to invest but the company doesn’t because of budget reasons. This was when I realised that these coding tests could be productised, and that’s how the idea of DevSkills was born.

2. What brought you to Alva?

My intention has always been to grow organically. And that’s how it’s been done. So we didn’t raise any money or external capital when DevSkills started. We were always self-funded. At the beginning it was just me. The customers would pay for the bare bones version of the product and I’d deliver. That’s how it’s been since September 2020. A few months later, in December 2020, Andreas from Alva Labs approached me. He heard what I was doing, and wanted me to help him design an interview process at Alva. He started his subscription and while at the time it was just bare bones, the solution helped him hire some great engineers.

Alva has been our customer for two years and at the beginning of summer 2022, Christoffer Norman, Alva’s current COO and one of the early investors, reached out and suggested we merge our efforts. We bounced a ton of ideas and in the end it felt like it'd be a mistake to not give this a shot as we matched on the mission.

If we take an analogy here it’s this. I managed to build a car with a diesel engine that’s doing pretty well. But then someone comes along and says, we can give you a V10 engine, you just need to adopt it so that your car goes way faster now. So before the acquisition took place, I asked two types of questions to myself: is this good for the customers? And that was a yes. And is this good for the product? Yes. Me and Alva were aligned, so it was a natural fit.

'Not every company out there has that much resources, or even desire, to invest in proper coding tests.'

3. What would you say is the number one issue companies are facing today when hiring engineering talent?

Imagine you’re a hiring team. You’ve created your own interview process which could look anything like a conversational interview where you go through the CV with the person, to something like copy and pasted questions from the internet. Then take the conversational interview: it’ll inevitably be filled with bias because first off, you read what’s in the CV, you don’t know what the person actually knows. And then you screen out candidates who don’t have a good enough CV and you don’t give them a real chance.

The problem here is that you’re not looking at the right things. You’re not clear enough in what you’re looking for, and the CV isn’t representative enough of someone’s skills. These are the most common hiring problems.

4. Why is hiring engineers specifically such a challenge?

While it depends on who is hiring, one of the common issues is how can you tell whether a candidate is good or not? The constraint you have is a couple of hours to determine whether a candidate is the best fit. Second, you assess what they’ve been doing for the past few years, without knowing for certain whether they’d be competent at the role or whether they’re ready to grow. The hiring process should be very careful in how you cut past the tape and focus on what matters. Money is also an issue. When it comes to smaller companies, they’re competing against the big companies who can afford putting senior engineering hours and hours into perfecting their process, while this option is definitely not available to everyone.

There’s a balance between defining a process accurately that makes sense and that will look at a candidate’s real competencies accurately, versus candidates who don't want to take the test and having to convince them.

5. How would you approach designing the hiring process for engineering talent?

I would first ask you what you've been doing historically, because this will reveal certain bits around what you value. Because often people have some predetermined opinions which are really hard to fight against, and are maybe not necessary.

Next, I would try to identify which bucket you fall into, startup or scaleup, and then push from there. The first bucket is when a customer might need help setting up their hiring process. They haven't gotten anything. But if you are a scaleup, you'll likely have made a few hires, so they’re looking for a tool to help them save time when running interviews. I would approach the situation here by establishing what type of assessment they’re into and need. What kind of problems do they have with their existing hiring setup? Are they losing time? Candidates? Both? The approach will be different depending on their problem. Then it’s a matter of suggesting what process  will help them the most to determine candidate role fit and save them time in the interview.

Or we can look at it differently. Imagine you’re running the show and you keep hiring the wrong engineering talent. Here I’d match them to a solution of trying real world testing.

6. What's next for DevSkills?

I want to make hiring engineering talent easier than ever. The ultimate goal is to strengthen our mission of making the hiring world a better place, and spread our reasonable hiring practices out there. Ultimately we want the same thing: to help TA teams to identify the best developer who can do the job. If we do everything in a reasonable way, it means that candidates will like the experience of taking the tests and it will make it more pleasant for them to attend the interview. Right now, the interviewing process is filled with stress and unreasonable questions and candidates hate it. If we can make that a bit better, we are already on to something.

Hiring engineers is notoriously difficult—and only getting more so.  High-caliber engineers are in high demand. What's  more, engineering candidates can cherry pick which roles to apply for. For organisations, this presents a pressing challenging.

How do you attract top engineering talent and encourage them to join your company?

In our upcoming free webinar, hear from three brilliant minds on this topic: Anton Fenske, Founder and CEO of coding test platform DevSkills, Lisa Sindsjö Grahn, avid tech recruiter and Talent Acquisition Manager at Alva Labs, and Andreas Gabrielsson, CTO at Alva Labs and the brain behind our own tech recruitment process.

Simply click the button below to register your interest and don't worry—If you can't make the session, you'll get the recording! 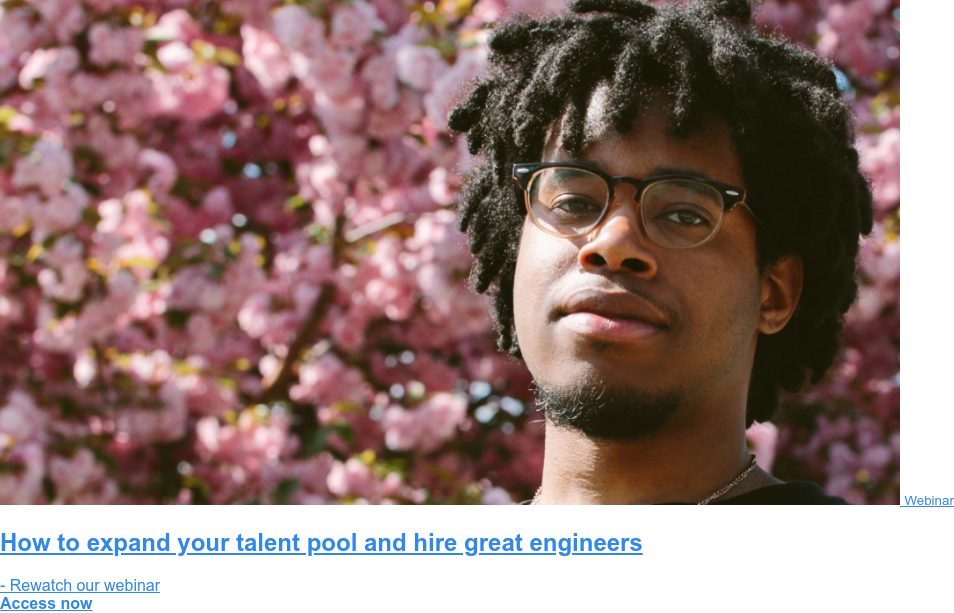