Nearly 40% of all internal promotions end in failure. There are many reasons for this: the usual suspects apply, we don’t think deeply enough about why we’re making promotions and, too often, we end up using our gut feeling to make huge decisions that impact our teams and our retention stats.

The promotion process tends to go one of two ways. Either it’s a slow process with many layers and committees; more commonly it’s super reactive and in response to a concern that we’re about to lose a talented member of staff.

Why is this? Retaining talented employees helps us to gain their expertise, their knowledge of our culture and organisation, and avoids costly recruitment processes. But past performance in one role isn’t necessarily predictive of success in a leadership role. Why is that? Well, managing people takes quite a different skill set than ‘doing’ the job, even for our high performers. Let’s look at why...

Why is gut feeling a problem in HR?

Approximately 85% of hiring managers rely on their gut feeling to make decisions about candidates. Many HR teams are under-resourced, and naturally there’s a tendency to lean on team leads when it comes to promotions. This is understandable: team leads know their skills-set, objectives and people. So the team leader/hiring manager, whilst being knowledgeable about their people, doesn’t necessarily have the tools to make a more strategic decision.

When we allow team leaders to guide promotions, we add the risk of team leads relying on their gut feeling - and making a poorly evidenced decision that leads into the 40% failure rate.

What is ‘gut feeling’?

What we call “gut feeling'' is pretty much a mix of our own past experiences and subjective interpretation of the world, which rarely provides an accurate representation of reality.

When we rely on gut feeling, we allow our biases to influence our decisions. For example, we tend to interact more with people that are similar to us and therefore our experiences and frame of reference are based on those types of individuals. This is known as affinity bias, and it’s something that we are all prone to.

So when we encounter candidates or colleagues who are different from us, we tend to take “shortcuts” and fall back on our gut feeling. But, gut feeling is not rooted in reality and there are actions we can all take in our internal recruitment processes to minimise its effect.

One of the biggest problems we face when making decisions around who and when to promote, is truly understanding what predicts future job success. Here are three examples of how gut feeling can affect our decision making:

Past Performance: We tend to lean on past performance as an indicator of future job success, but it’s not a good predictor. Why? When we are promoting someone, it’s so they can do a job they haven’t necessarily done before. Therefore, their past history isn’t a valid tool for measurement.

The Work from Home Effect: The UK’s Office for National Statistics found that people who work from home are 50% less likely to receive a promotion. When those same people return to the office, their chances of promotion return to the mean average. With women comprising the highest proportion of the population requesting more flexible working, there is a clear risk that we fail to capitalise on the female talent pool.

Despite being regularly overlooked in internal processes, we need to measure both readiness and potential to be able to understand if a candidate will be a good fit for the role.

Why are structured interviews helpful in promotion meetings?

One of the best methods to assess a candidate’s readiness is to conduct structured interviews. However, “too many candidates, and hiring managers, shortchange the internal interview process; they view it as a formality and think that all of the evidence is already there” (HBR, 2013).

Even if the internal candidate had an interview when they joined your organisation, it’s best practise to conduct a new structured interview in the internal process to assess their current skill set (if they’re great candidates, that skill set will probably have evolved since they joined - don’t you want to know how to harness that?).

Standardising the interview process, by asking the same questions to all candidates and using the same scoring anchors when evaluating their responses, allows for less unconscious bias to derail the hiring decision.

How does insight into logical ability help in internal processes?

General mental ability, which is measured through logic tests, is a strong predictor of job success in any given role (as shown in the chart above). Logical ability tests capture how an individual handles unstructured information and what they do when they don’t really know what to do. 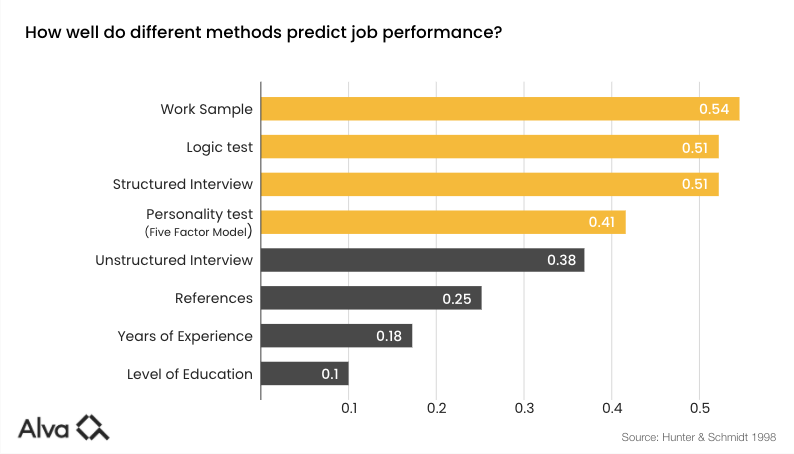 This is an important ability to assess when it comes to internal candidates as well - since it means looking at a factor that research has found to be predictive of success at work, instead of simply relying on your gut feeling or past interactions or impressions of that candidate.

The Big 5 and future job performance

The Big 5 personality model is a well validated psychological theory; regardless if your process is internal or external, it’s a really valuable knowledge base that underpins an evidence-based recruitment process.. As you can see in the chart above, personality is a good predictor of future job performance.

By thinking more about the personality traits that a successful candidate needs to possess, HR teams can more deeply understand who within their company has the potential for success in a role by assessing the candidates on 5 broad personality factors: openness to experience, conscientiousness, extraversion, agreeableness and emotional stability.

How does the Big 5 predict job performance in Customer Success?

So it’s performance review time coming up. You have a few team members who are performing well and you want to support their career development, and retain their expertise. But how do you assess them? Let’s look at what comprises a really successful Customer Success rep:

In addition to logical ability, the level of job performance in roles within Customer success has been shown to correlate with being agreeable, conscientious, extraverted (confident) and emotionally stable. In simple terms? Think about the daily activities of being a Customer Success Rep: being kind and accommodating, structured, social and emotionally stable so that problems can be solved effectively and make customers know that they are seen, heard and valued.

Here’s how you can weight the Big Five personality factors to better understand a candidate’s potential for being a good fit to a Customer Success role:

Picture this: you’ve got 2 amazing Customer Success reps that both have high levels of logical ability and of each important personality trait.

But going forward there will be a need for someone to take on a strategic leadership role within Customer Success.

You might think the most senior rep is your best bet, right?

Let’s break down if that’s the case.

How does the Big 5 predict job performance in Strategic Leadership?

The fact is that the predictors of future job performance in strategic leadership roles differ from the predictors of success in customer-oriented roles. When it comes to personality for example, the success in strategic leadership roles seems to have a stronger connection to high levels of openness as well as extraversion. Again, let’s think about it; a strategic leader is more likely to be changing processes, so they are likely to have to be more creative and open to new ideas than a customer success rep.

Being assertive and having high energy levels has been seen to be especially important in leadership roles, as you have to be both motivating and commanding.

Let’s have a look at the importance of the different factors when predicting a candidate’s potential for strategic leadership roles:

If you had selected the Senior Customer Success rep based on their seniority or past performance, you would be basing your decision on their performance in their current role which is not that related to what they would be doing in their future role. Once you’ve measured the potential of both candidates and conducted structured interviews with them, you might come to realise that the other Customer Success rep was actually a better fit for the promotion.

How can your next promotion be a success?

HBR states that “more than 70% of today’s top performers lack critical attributes essential to their success in future roles”. By deep-diving into what actually predicts future performance in a role, we’re much more likely to help our employees and organisation to flourish. Mistaking management track as being the only pathway to success is a mistake.

Your fantastic Senior Customer Success rep who has the best client relationships and is doing a great job in their current role isn’t necessarily the one who will be able to deliver a new and innovative strategy or be a great strategic leader. Their insights could (and probably should) inform the process, but instead of becoming a manager, this Senior Customer Success rep could, for example, be instrumental in creating new best practise frameworks.

The same accuracy is needed as in external ones. The current employee must, in the same way as an external candidate, be matched to the job that the new position entails (Galfvensjö, 2006). Remove the guesswork in all your HR processes and allow science to be your trusted ally.