The CV has been around since Leonardo Da Vinci wrote a letter to the Duke of Milan in 1482, requesting a work placement. But does this mean CVs are still as relevant today as they were 500 years ago at identifying a person’s values and behaviour?

Spoiler alert: The hiring world has come a long way since Vinci’s letter.

As humans, we’ve made great leaps forward, thanks to science and technology.

We no longer communicate with telegraphs.

Nor do we write stories on typewriters anymore (thank you Adam Osborne!).

And corded telephones? They are a thing of the past.

So why are we still using CVs?

The case for getting rid of the CV is straightforward: the likelihood of being biased and discriminating against a cohort of candidates increases when using CVs to screen out talent. For that matter, this document fails to accurately capture a candidate’s full story, range of skills, or potential.

Is it time to pick behaviour-focused hiring strategies and abandon the CV?

#1: CVs as a tool of discrimination

Behavioural science is overwhelmingly clear when illustrating how CVs can be used to discriminate and exclude certain candidates from the hiring process.

A research report released by CIPD found that identical CVs received more callbacks when the candidate had a white-sounding name than when they had a name associated with an ethnic minority group.

In Sweden, Hira Wasif felt the brunt of the job market when after graduating with a Master’s degree in psychology from Lund University, she struggled to get past the first stage of the hiring process.

'I felt compelled to consider legally changing my first and last name when after eight months and more than 100 applications, I failed to get the first-phase interview, while my equally qualified coursemates had landed the jobs I was applying for.'

Unfortunately, name discrimination is still a common practice around the world.

A report by Equality reveals how in Ireland, job applicants with Irish names are twice as likely to be invited to an interview than candidates with non-sounding Irish names—despite both groups sending identical CVs.

What’s more, a 2015 study by ANU revealed how applicants with Chinese, Middle Eastern, and Indigenous-sounding names were far less likely to advance to the interview stage.

This shows just how much damage CVs can do to your screening process—and your diversity efforts.

Affinity bias is one of the most prevalent types of unconscious bias. When we meet people—whether in an interview or via a quick CV scan— we tend to assess them on factors like gender, ethnicity, nationality, class, and sexuality. These quick assumptions can actually harm our ability to objectively evaluate candidates, hampering our efforts to build a fair and equal recruitment process.

Here’s a scenario for you: Dan is a Talent Manager looking to fill the role of Sales Team Lead. He’s originally from California and attended an Ivy League college. Dan receives two CVs in his inbox.

Candidate 1: Tim holds a Bachelor’s in marketing from an Ivy League college and has experience leading a sales team. His home address is listed in California, and he’s about the same age as Dan.

Candidate 2: Alicia graduated from a state university with a Bachelor’s in marketing and has a Hispanic-sounding surname. She’s got about the same amount of experience as Tim, but she is considerably younger than Tim.

Who is Dan likely to pick for an interview? Science says Tim. In reality, any number of biases can crop up when scanning over someone’s CV, with affinity bias leading managers to discard perfectly qualified candidates because they don’t share similar traits.

Female candidates are more prone to experiencing discrimination than male candidates, with women typically missing out on callbacks for any number of reasons—including long gaps in the CV due to maternity leave, down to simply applying for a position in a male-dominant sector.

According to researchers at Universitat Pompeau Fabra in Spain, women are on average 30% less likely to be called for a job interview than men with the same characteristics.

The picture looks increasingly bleak. Motherhood penalty has shown to be a real thing when companies screen candidates, with women who don’t have children being twice as likely to get invited for an interview than equally qualified applicants who are mothers.

'The evidence is clear: CV screening carries a severe risk of bias and discrimination in recruitment, and should be replaced with more objective and predictive methods.'

Think about it. The CV is a list of the candidate’s past experiences and achievements. It doesn’t predict how well the individual will perform in the future.

This is where Hunter and Schmidtt’s landmark study comes in. Pulling together 85 years of research on how to assess candidates, they looked at the predictive validity of different assessment types. Factors like education, years of experience, and references were the least effective method for predicting job performance.

In other words, the staple ingredients of the CV, including a person’s education and years of experience, are the weakest indicators of ability and the strongest potential for bias.

But wait…should the CV be completely discounted?

Here’s the thing. Although imperfect, CVs can still showcase a candidate’s achievements and skills in a digestible format for recruiters. From the candidate’s side, they can serve as a perfect addition to their portfolio.

There’s no doubt that for more senior-level positions, years of experience and past accomplishments do count, and shouldn’t be factored out of the equation when evaluating candidates.

In reality, CVs are still not outdated but are evolving to become part of a more evidence-based recruitment process. When used with more vigorous evaluation methods, the chances of removing bias from your hiring increases.

No matter how you view it, investing more resources into making the right hiring decisions pays off.

Identifying and hiring top talent is no small feat. But the business rewards are tremendous, with a Mckinsey study revealing how high-performers are 400% more productive than their counterparts. While talent is valuable, many organisations still struggle to attract, hire, and retain top talent.

So how can you spot the superstars from the crowd? Definitely not by relying on CVs to assess potential!

Instead, a viable solution could be to use an assessment tool to objectively evaluate candidates based on their competencies, personality, logic reasoning abilities, and potential to thrive in the role. This means that talent is assessed for their potential and individuality at the earliest stage of the recruitment process, as opposed to using a CV to evaluate their role suitability.

We don’t ask for CVs as part of the Alva Labs recruiting process. Instead, we evaluate candidates through evidence-based psychometric assessments, which allows us to reduce biases based on factors like gender, education, and past experience, and focus on more measurable traits to predict performance and determine role fit. Our adaptive personality and logic reasoning assessments are based on the Modern Test Theory.

How our assessments work: 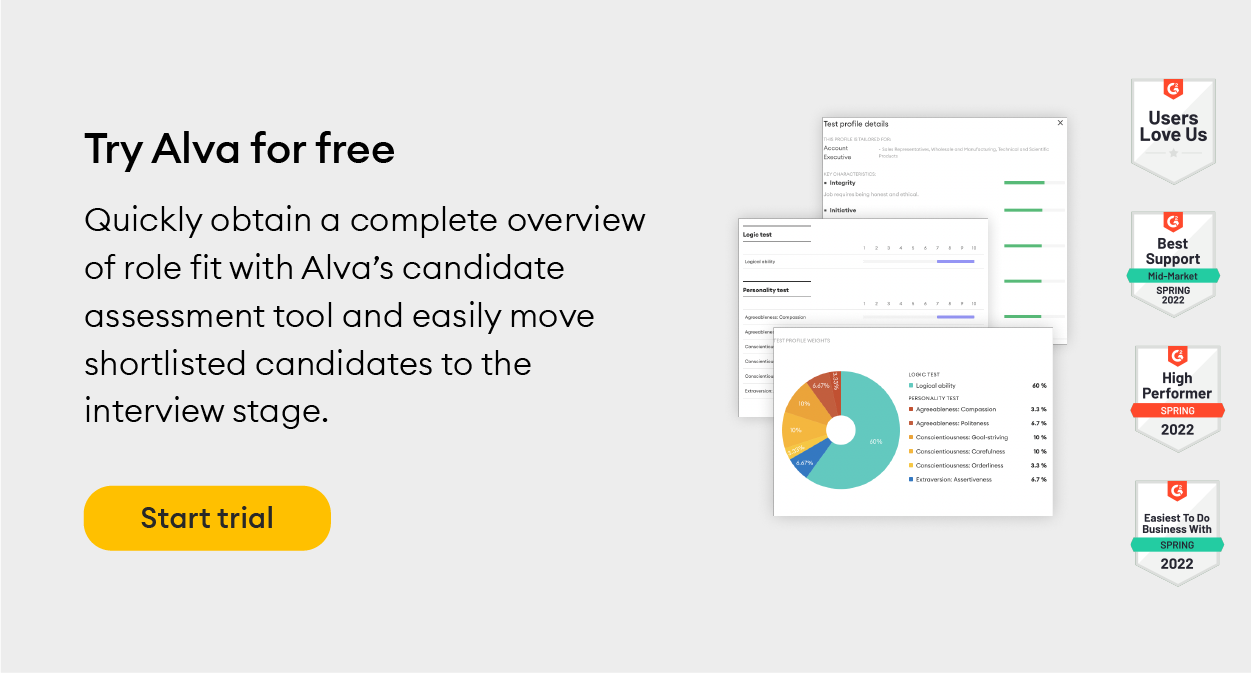